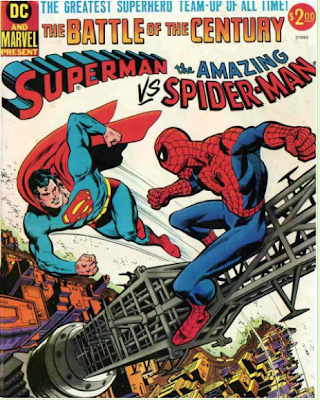 11PM
I wasn't counted absent after all! I caught on pretty well to the algebra I couldn't figure out at all yesterday. Guess sometimes you really do need to just step back from everything a bit. I saw Doug on the bus home from school. Hadn't seen him in a while now and we used to see each other all the time. Couldn't talk to him anyway as nobody could ever hear a thing on that bus!
It rained all day but it all turned to snow by late afternoon. It snowed hard and is still snowing now! We threw some salt out at the SS office after I got home. Earlier, though, I hit Cincinnati after school where I grabbed Marvel's version of SHERLOCK HOLMES, a new Rona Barrett mag with new pics of Linda Blair and the long-awaited SUPERMAN VS SPIDER-MAN! Kind of disappointing. I've seen better artwork and better stories but in this case the event itself overshadows everything! Wish they could have gotten Neal Adams to draw it!
I got another TBG today! Turns out yesterday's was last week's issue running late.
I talked with Angie a lot today. At one point I even caught myself saying something from my heart instead of my brain for a change. Made me actually feel human. Didn't much care for that feeling though. Way too vulnerable. Guess I prefer loneliness to human disappointment or even the potential for it. I did not follow up on anything and instead went back into my protective shell.
Doc let me out a few moments early today to return a film to the AD Office but I got lost. I took Mr. Hammer my 1905 Robert E Lee book to read.
Finally tonight, I just finished watching one of last year's favorite Made-For-TV movies again--THE COUNT OF MONTE CRISTO starring Richard Chamberlain and Tony Curtis!
Notes: Doug had been a close friend from 5th through 7th grade. We were even grade school rivals over Debbie at one time. In high school, we rarely ran into each other, though.
The SS Office? No, we were not anachronistic fifth columnists. My parents took a job cleaning the office building next door to us every night. It was owned by the landlord who owned our apartment building. At the time it was the Social Security Office. It would later become the Cincinnati Enquirer office and by that time I had taken over the job from my parents.
The funny thing about the SUPERMAN VS SPIDER-MAN book is that it has come out in recent years that, in fact, Neal Adams DID redraw a lot of the art! The book was inked by Adams' then studio-mate Dick Giordano and Neal was apparently enlisted to help with the inking in spots but, realizing the importance of the comic, "touched up" some of credited artist Ross Andru's pencils, also, a fact that remained a secret until after Andru passed.
Doc was one of the most popular teachers at school. he was friendly, handsome, had a great FM-radio style voice and he was genuinely funny! He seemed to know Physics, also. I just never found him to be all that good at getting the rest of us to know it as well. Ultimately, Physics would be one of the few final exams ever that I would fail.
I still have that Robert E Lee bio from 1905 by the way. Tried to sell it on eBay last year but no takers.
Posted by Booksteve at 1:04 AM