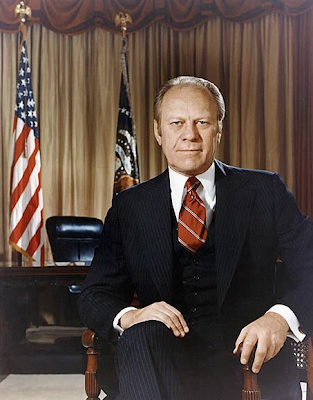 11:00 PM
Got up early to start reading all my new stuff! I read or at least skimmed most of the books I bought yesterday by day's end. I saw a short article about the Con in the paper. I forwent the movie I was planning on seeing due to sleet and ensuing icy conditions.
Not much good on TV tonight due to Ford so I had more time and a better chance to read.
I just got off the phone with Terry. He called late and we talked for about an hour and a half mainly about comics and the search for being. Gave me some new insights.
Only thing that really marred the day was I did IT again out of schedule! I got so mad at myself I went ahead and ripped up that magazine and threw it away! Guess I can't really stick to a schedule after all but just have to try to avoid IT as much as possible.
NOTES: Not much to say here. President Gerald Ford dominated all 3 networks and PBS that evening with the annual State of the Union Address. Still just a year and a half after Nixon, we pretty much gave Ford a pass on everything else. As long as he wasn't Nixon, we'd wear his silly WIN buttons and say the state of the union was good!
President Ford, our only non-elected President, was a pleasant but non-descript man who I think in retrospect was what the country needed to immediately follow Nixon. Later that year, I would miss seeing him in person on Cincinnati's Fountain Square by mere minutes. Instead, what I saw were the thousands and thousands of VOTE FOR ME flyers littered for blocks by his quickly scattering supporters after the President left the area.
"IT" remained a continuing issue to me. I have no idea now what insights I got from Terry that day nor what movie I had planned on seeing. Shouldn't this have been a school day in that pre-MLK Day era? Did nothing happen at all in school?
Posted by Booksteve at 12:29 AM