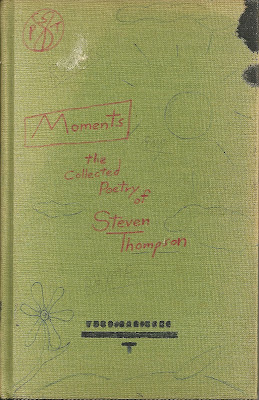 NOTES: 2011--I started writing what we would now call rather "emo" poetry circa 1970. By this point, it was a bit of a regular thing. Don't judge me! A lot of YOU did it, too, you know! It's a fairly standard teenage thing, actually. My poetry, however, was genius...or so I thought at the time anyway. I began collecting it for posterity in a blank book that was thrown away at the office next door. Looking back now there really ARE some good ones....like five maybe...out of a couple of hundred! Don't worry. I won't make you read them all but this one, written today in 1976, is referenced in a couple of days in the Journal.
ALL ON A DARK AND SHADOWY DAY
by Steven Thompson January, 1976
All on a dark and shadowy day,
Three lights upon the sky.
There the wind and rocks at play,
Angel, devil and I.
If a dream would die 'neath velvet clouds,
A calm we've never known,
Would live the life of desert sands,
To the wind forever blown.
All on a bright and beautiful day,
No sights upon the sky.
There, where the silence of ages lay,
I lay me down to die.
Trust me, almost all of 'em are like that.
I continued writing poetry for another five years or so and there are even a few stray poems in the volume from the eighties, nineties and one as late as 2002! Sadly, with the occasional exception, I never got much better than this one.
Posted by Booksteve at 7:03 AM