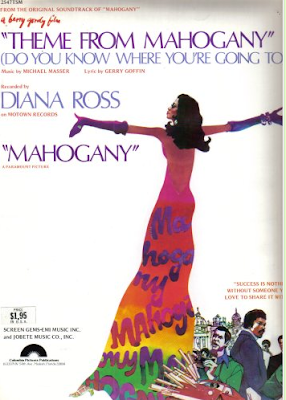 11:00 PM
Got up early and read more comics today. Then I watched a movie on TV.
Later in the day, Terry came over but we didn't end up doing any more than just reading through more comics. He stayed late. We watched the Golden Globes but I couldn't really get into them because Terry just didn't seem to care so I'm not sure who ended up winning anything.
Just not really a good day. It rained all day long and I developed a really sore throat as the day went on. I did manage to get in a bit of Sherlock, though.
Lately I find myself really wanting a normal adult life with marriage, kids, etc but I just can't see myself that way no matter how hard I imagine it. Maybe someday...
NOTES: Not much to add on this one. As you might imagine, at this late stage, I have no earthly idea what comics I read that day nor what film I watched. It was very unlike me to be so generic in my journal entries.
The number one song in America this week was Diana Ross's THEME FROM MAHOGANY (DO YOU KNOW WHERE YOU'RE GOING TO?). Eventually this would become our class song...our SECOND class song. The first was Jefferson Starship's MIRACLES. After it had already been announced as the class song, somebody somewhere apparently became aware of the longer FM version of MIRACLES with the dirty lyrics and suddenly (surprise!) it was changed. I never did know if the original choice was someone's attempt to slip one past the establishment or just an innocent mistake.
In case anyone's interested, here are the Golden Globe Award winners from this date in 1976:
http://www.imdb.com/event/ev0000292/1976
Posted by Booksteve at 12:32 AM