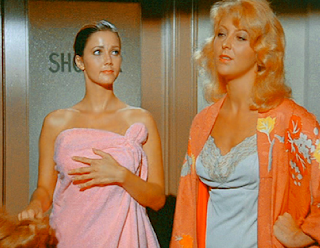 Speaking of Barbi, when no comics were out today, I bought the controversial Jimmy Carter issue of PLAYBOY. Has a nude section on another HEE HAW girl, Misty Rowe. Still no Kurtzman and Elder. I also got Dad a World Series book.

WONDER WOMAN returned tonight and ANGELS was on after all.

Dad made me so mad when he told me they were always tearing up records and throwing them away at work. Please, please, please let me get mine!

NOTES: That issue of PLAYBOY was actually the first I ever actually bought and none of the few I had looked through had ever had LITTLE ANNIE FANNY, the painted comic strip from Harvey Kurtzman and Will Elder of early MAD fame. Thus my frustration that this one didn't either. In spite of the distractions in the rest of the issue, I actually did read the Jimmy Carter interview in which he spoke of "lusting in his heart."


My dad, as I've mentioned before, was working at the Post Office as a janitor. Anything that lost its address...even if it had money in it!...they had to destroy! Not sure that was legal but...


What really strikes me about this entry, though, is the casual comment that "WONDER WOMAN
returned tonight." That particular episode was entitled "Beauty On Parade" and featured actress Christa Helm in what would prove to be her most memorable role before her murder just four months later. A few years ago, I ended up almost inadvertently becoming a part of the cold case effort to solve Christa Helm's murder. For all the details of THAT fascinating story, go HERE.