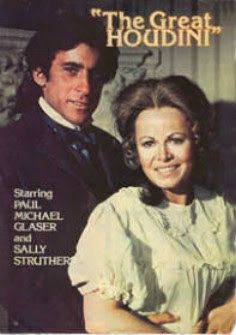 Big day started with IT early. Dad brought home coneys for an early lunchtime. Then we all left for Cincy about 12:15 and went to Shillitos where we picked up three fair to good tickets to see the Hope show. Then, borrowing four bucks from Dad, I bought an eight buck history of sci-fi books! Then we all saw a fair horror movie in BURNT OFFERINGS.
Big surprise! Saw Marcia and the two younger Bradys with Florence Henderson on DONNY & MARIE! I didn't even recognize the kids. Kids??!! Not any more.
Saw my first Farrah commercial since getting the poster. Watched Sally Struthers in THE GREAT HOUDINI just now. At the end, Viv called Harry an S.O.B.! She can't say that on television!!! ...but she did!
NOTES: It was rare the whole family went to movies together anymore. BURNT OFFERINGS was a pretty old-fashioned horror film from Dan Curtis who had done TV's DARK SHADOWS.
The book I bought that day was A PICTORIAL HISTORY OF SCIENCE-FICTION, a British import by David Kyle.
The Brady actors' appearance on DONNY & MARIE would lead soon enough to THE BRADY BUNCH HOUR, a similar variety series reviving the classic sitcom in bizarre circumstances! It's considered one of the worst TV programs of the seventies.
THE GREAT HOUDINI was a marvelous TV film starring STARSKY & HUTCH actor Paul Michael Glaser as the legendary escape artist with Sally Struthers as his wife, Ruth Gordon as his mother and Vivian Vance as his nurse. The rest of the impressive cast included Peter Cushing, Bill Bixby, Jack Carter, Adrienne Barbeau and Maureen O'Sullivan! Not your average TV movie! And that language! I was obviously shocked! And yet you never see it anymore. Is it even on DVD?
Posted by Booksteve at 12:18 AM