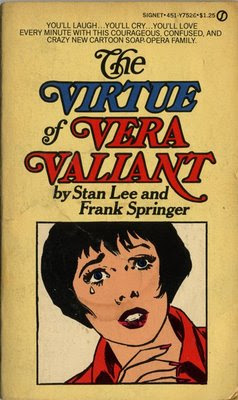 Tomorrow will be a bad day. Two months ago an astrologer told me so. Good day today, though.

I spent the entire afternoon finishing up the two HORIZONS posters--CLOWN and SEX. I'm planning to leave them home until Tuesday.

Paper was very late but we finally got it. And it had VERA VALIANT, VERA VALIANT by Stan Lee and Frank Springer!

Mom went shopping again and brought me back some new slippers, two footlong hot dogs from Dairy Queen, the INSIDE STAR TREK album and, bonus, a new 5 band radio!

Steffie turned up for the first time lately with Bill Cosby. It was great!

NOTES: "Steffie" was, of course, Stefanie Powers, one of my permanent crushes. Not sure now why she would have been on COS.


VERA VALIANT, VERA VALIANT was the name it was given in THE CINCINNATI ENQUIRER, a riff on MARY HARTMAN, MARY HARTMAN. In reality, the strip, a rip-off of the style of that show, was entitled THE VIRTUE OF VERA VALIANT. It didn't last very long in the local papers but it lasted long enough overall for a paperback collection.


The HORIZONS posters were my first attempt at such design-oriented art. I spent a lot of time at the kitchen table drawing and coloring them on mid-size poster paper. CLOWN featured a smiling, very traditional clown with his arm sticking out across the poster and the letters of the name HORIZONS rolling across it. SEX featured a lovely scantily-clad blonde (that I probably copied from a dirty mag) with the word itself, "SEX," in gigantic letters. In smaller print, it said, "Now that I've got our attention, it's time to order HORIZONS."That one would prove to be controversial.


It's cool that I was excited about a 5 band radio. It's sad that I don't even recall exactly what that was at this late stage.