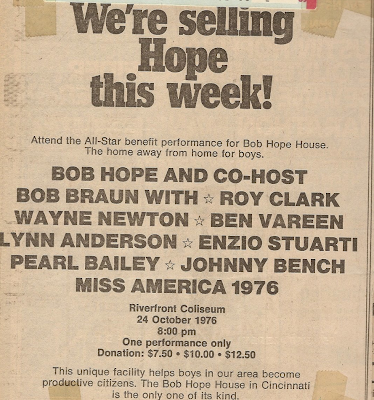 Basically a bad day at school. Did, however, get rave notices on a paragraph I wrote for Comp. We went outside for class though and I didn't like that much. Mr. S told me to go to Senior Library in our extended homeroom.
I saw where Bob Hope is coming to Riverfront. $12.50 a ticket. Hopefully we can go.
A very good M*A*S*H and ONE DAY AT A TIME tonight.
NOTES: Bob Hope did several of these charity shows for a local charity he supported in Cincinnati. Eventually, he ended up doing a golf tournament instead of the actual performances but we always went when they had the actual shows. The guests lists would fluctuate usually right up to the day of the show. In this case, for example, Ben Vereen, then at a peak of popularity after ROOTS, did not show up. In 1977, talk was that Hope would get Bing Crosby to come...only then Bing died.
Posted by Booksteve at 12:15 AM