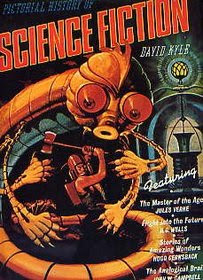 After church, I watched a '68 movie that it turned out I had seen in the theater back in '68 of all things! Didn't remember it at all at first.
Read the sci-fi history the rest of the day. Very engrossing!
The Reds won their second.
Finally cleaned my desk off again.
Shatner and Walter Koenig were reunited on tonight's return of COLUMBO! OR at least TV GUIDE says they were. I just watched it and didn't see Walter anywhere! Not at all.
NOTES: According to IMDB, Walter Koenig, STAR TREK's Chekhov, was "Sgt. Johnson" on Shatner's COLUMBO episode. I don't think I've seen it since so I still don't know where I missed him. Must not have been much of a role.
David Kyle, the author of this very first history of science-fiction I had read, was a prominent BNF (Big Name Fan) in sci-fi fandom since its earliest days and later a writer. Still around today in his nineties, he remains a seminal historian of the genre.
Posted by Booksteve at 12:25 AM