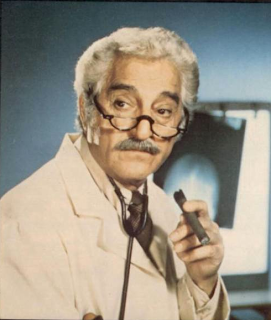 Saw a Sherlock special on TODAY.

No new comics out. Well, there were a couple. I got one and Wendy's.

I almost screamed and cried at the same time as the dumb old local stations (both 2 and 5) took off the highly publicized episode of THE PRACTICE with Marlo! Now if it gets canceled I can never see it!

NOTES: Sherlock Holmes again. Seriously, 1976 was a good year for the man from Baker Street.


THE PRACTICE was a then-new sitcom starring TV veteran Danny Thomas as a doctor (who looked vaguely like Groucho). It wasn't bad but it only lasted the one season and, as predicted, I've never seen the highly advertised episode form this evening 35 years ago in which Thomas' daughter Marlo, THAT GIRL, guest-starred with her father.
Posted by Booksteve at 12:09 AM