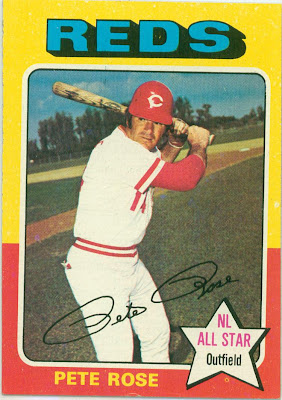 Pretty bad morning. Got the paper for a change but NO TV mag! From about 11:30 on things got better.
At Bell-Block, I saw Pete Rose coming out while I was going in! I didn't know what to say but he looked at me and smiled behind big ol' sunglasses like, "I know you know who I am, kid."
Saw SCORCHY, a pretty good cop drama greatly enhanced by my first nude views of Miss Connie Stevens. Lots of topless shots of the middle aged Miss with the sexy voice and one very realistic looking intercourse scene! Wow!
Got a few new books which occupied most of the rest of the afternoon (including HIGH SOCIETY). May skip a movie tomorrow and go with Mom to Rinks instead to get a Farrah Poster. Terry says they have them there.
NOTES: Looks like the Farrah posters came out sooner than I remembered.
Speaking of memory playing tricks, the way I've told that Pete Rose anecdote above for as long as I can remember is that he was leaving the store as I entered, pushed the door open very quickly and nearly knocked me down, saying, "Watch it, kid." I stammered back , "You're P...Pete Rose" and he hurried on his way. Inside, the store owner told me Pete had been in to buy a gift for his fellow player Joe Morgan. Pete was my favorite player then and now so why would I make up anything negative about this momentary experience? On the other hand, why would I leave out anything negative that very day if it had actually had happened the way I remember it?
Connie Stevens a "middle-aged Miss?" Hahahaha. She was 38 at the time. Seems so young now. I had long enjoyed Connie on TV. I read where she spends much of her efforts as a conservative political supporter these days.
And I like the reference to the "very realistic intercourse scene." Like I'd have had a clue what realistic looked like.
Posted by Booksteve at 12:07 AM