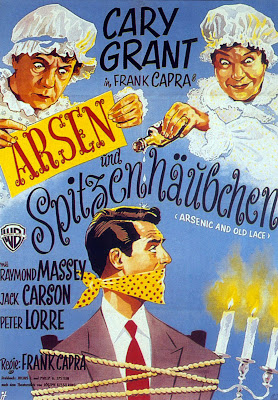 Saw George P. today and then later ran into Mrs. Rettig, too. She told me Mrs. Marrs has retired.

There were a few new books out including a new one on sex in films but I didn't get yet.

Another two hour Bob Hope special on tonight and I stayed up 'til 12:30 to watch the first part of ARSENIC AND OLD LACE.

NOTES: "George P." was the son of our former landlady. He had at one point hit my dad--a notoriously soft touch--up for fifty dollars and gave him two gold rings melded together with multiple diamonds as collateral...and then he moved away and never came back for them. Years later, my wife and I sold the gold but had the diamonds popped out and inserted into our wedding rings.


Mrs. Rettig had been my favorite grade school teacher. She reminded me of BEWITCHED's Agnes Moorehead and she was the first person I ever heard described a s a"bitch" but to me she was always great. I had her for both second grade and third grade! Again, zip forward more than a decade more and one day when my not-yet wife and I were just out for a walk down by the Ohio River we ran into...Mrs. Rettig!


Mrs. Marrs had been my first grade teacher, beloved by everyone. I had last seen her when, as a favor,  sixth grader me walked one of her students to a nearby clinic for required shots...and picked up chicken pox at age 12!


ARSENIC AND OLD LACE is a manic black comedy with Cary Grant starring in the film version as Mortimer, a role I played when we read the play aloud in class in high school!
Posted by Booksteve at 12:32 AM