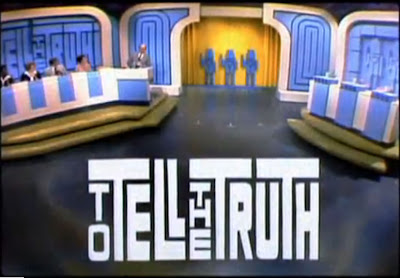 Feeling down but went to school after another sleepless night. Wasn't that bad I guess but the did cheat me outta my HOLMESPUN. I was indifferent to Constance today.
No SS work tonight since they weren't there at all today because of the holiday.
Finished the sci-fi book!
Had beef stew for the first time in ten years tonight but the old taste just came right back. Delicious!
Bill Shatner was a guest on TO TELL THE TRUTH.
NOTES: HOLMESPUN was the school newspaper. I don't recall it as being particularly riveting so it must have been the principle of the thing that I was ticked I didn't get my copy that day.
The holiday, of course, was Columbus Day. It was always confusing as a child in that some years we were off school, too. Others not. Generally we went, though, and just banks and post offices were closed. This was complicated more by the fact that the buses were on holiday schedules.
TO TELL THE TRUTH was one of those smart panel game shows with four celebs, in the case of this show generally including Kitty Carlisle come hell or high water. The panel would attempt via questioning to determine which of three contestants is the person they claim to be. It lasted all through the sixties and was revived in the early seventies and a number of times since.
Beef stew. Yum! Still don't have t that often but that taste really does come right back with nostalgia.
Posted by Booksteve at 12:34 AM