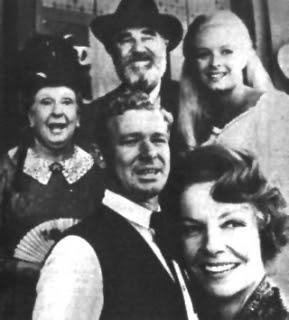 Went past Oktoberfest in downtown Cincy to get us Wendy's for lunch. On the way back, I picked up the new MEDIASCENE at Kidd's--my first purchase at the new location!
The mailbroughta letter, the San Diego Con Program Book from last year I ordered and my last sub issue of RBCC. Need to resubscribe.
Little time for my new sci-fi book yet.
Watched a PISTOLS 'N" PETTICOATS compilation film. Loved that show. Playoffs started tonight. Saw MONKEES in a concert episode I don't remember ever having seen before and I heard they're back on weekdays with STAR TREK replacing that music show.
I started wondering if maybe I could become a comic book letterer.
NOTES: Answer: No. I could not have become a comic book letterer. At the top of this page were three word balloon lettering samples and they were all strictly amateurish. This particular ambition didn't last long.
PISTOLS 'N' PETTICOATS was a fun comedy western from about a decade earlier that was cancelled after a single season when its lead actress, forties "Oomph Girl" Ann Sheridan, died of cancer halfway through the year. With not enough episodes to rerun, it was never seen again. After the series' run, though, the producers had edited together 3 episodes into an ersatz feature film and that's what I saw today. In recent years, I've managed to see quite a few of the actual episodes and it holds up pretty well.
Posted by Booksteve at 12:11 AM