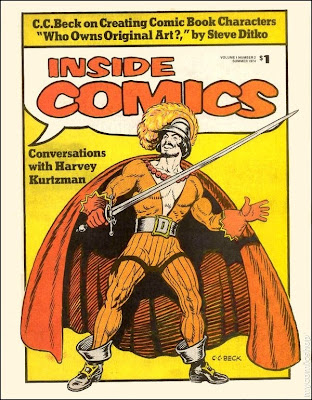 Awoke to snow both in the air and on the ground. Continued until around noon.

Took an INSIDE COMICS to school to read.

Came home after school and then over the river. All I ended up buying was Mona's STARLOG and dinner but when I arrived back home, dad had brought coneys!

He had also gotten out turkey-bird for tomorrow!

IT. I destroyed the alley picture and then played records all evening.

NOTES: The "alley picture," for those who've forgotten (or weren't here) was a black and white hardcore photo I had found in the parking lot next to the alley out back. It had born torn from a book and was the first image of this sort I had ever seen! Keep in mind that in those pre-Internet days, actual pornography was not as easily seen...especially in Cincinnati.


INSIDE COMICS was a cranky, short-lived fanzine/magazine from a couple years earlier about more serious aspects of comics. It was edited by THE MONSTER TIMES' Joe Brancatelli, now a well-respected travel writer with whom I corresponded briefly a few years back.
Posted by Booksteve at 12:51 AM