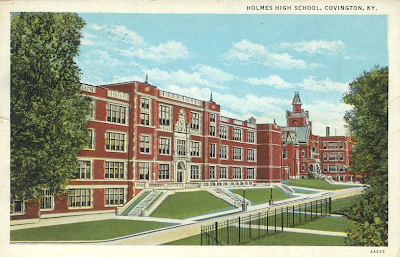 Strange day. Really, really bothered by those freaks in Algebra! I actually resorted to foul language and almost lost my temper!
Dumb ol' Mr. (illegible) gave us a test half-based on chapters we'd skipped!
Got the Annual and as usual got no one to sign it. At first I didn't think anyone was even going to ask me to sign theirs but by the end of the day I'd signed four. One of the freaks actually asked me to sign his but I refused.
Physics was okay for a change. Brought my Physics book home for good.
I jokingly said something to Kenny after school about a ride home and got one down as far as Fifth and Greenup with him and Janet! Seemed weird riding with someone my own age. He had a van parked in back of the school. I'd never been in back of the school before! First time I've ever ridden in a van, too.
I feel like I'm in a period where my brain is just so overworked I can't concentrate on anything. I'll get some time off in just 3 or 4 days and I really need it. I feel like I'm starting to grow up.
Oh, terry called late tonight, too. He will be able to make "JUGS" on Sunday after all.
NOTES: I apologize to whichever teacher I called "dumb" but I legitimately couldn't make out the name in the journal.
Kenny was someone I was very close with in seventh grade but we had grown apart quickly. Four years earlier, he was a geek like me. By this point, he was driving and had a girlfriend. I may have written here that I felt like I was growing up but I remember being jealous of him that day. You'll note that I was particularly impressed with my first visit to the back of the school. This was essentially just the parking lot. Since I didn't drive, I had never had any reason to be back there. Oddly enough, I've been back there a number of times now as I park there to attend my son's various school functions.
I never had anyone sign my Yearbook. I'm not sure if I was just being contrary and in my own small way rebellious or if my oft-stated belief that writing in it marred a perfectly good book was what I really felt.
"JUGS" was MOTHER, JUGS AND SPEED, a new movie opening that week with Raquel Welch, Bill Cosby and some new guy named Harvey Kietel!
Posted by Booksteve at 12:14 AM