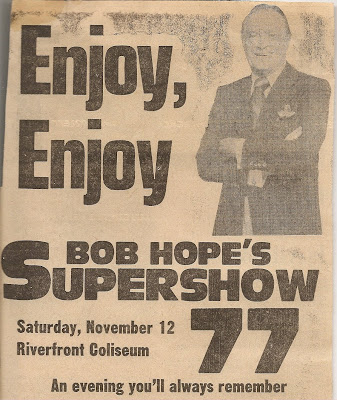 Elton and Kiki on WONDERAMA this morning.

Went ti see the great movie THE FRONT this afternoon and picked up the new JLA.

Depressed later in the afternoon but we ate early and went back over the river at 7:15 to see the show. It started late but we saw all but Ben Vereen who didn't show. Fabulous! Especially Wayne Newton, Roy Clark and, of all things, Enzo Stuarti!

NOTES: Damn! My 4 lines rule meant I couldn't say much about the Bob Hope Show! Luckily I wrote no less than 2 pages about it in my SCHOOL Journal two days later...and here it is now:


Every year Bob Hope comes to town to get money for a favorite local charity, The Bob Hope House. This year, in an attempt to get enough money to burn the mortgage on the house, the great comedian decided against his usual golf tournament in favor of a concert with himself and some of his famous friends. Scheduled to be a two hour event, the extravaganza started almost half an hour late and lasted 4 hours!


First Bob Braun, probably our most well-known local entertainer, sang and joked for about ten minutes as singer Lynn Anderson had missed a flight and was forced to get a ride down in the rain from Columbus!


The first major performance of the evening came as operatic singer Enzo Stuarti treated the vast audience to a medley from MAN OF LA MANCHA, THE BATTLE HYMN OF THE REPUBLIC and an aria from PAGLIACCI and met with probably the mist unexpected triumph of the evening! The crowd loved him!


During his performance, Miss anderson apparently arrived as she appeared next on stage. She wore a thin, yellow, flowing gown and did several popular songs, ending with her signature ROSE GARDEN.


Following this was a long and elaborate concert put on by former country music "Entertainer of the Year" Roy Clark. Backed up by several back-up vocalists and and a full band, he ran through a gamut of country to pop to masterful instrumentals, all aided immensely by Roy's great wit. He got a standing ovation.


Then the great Pearl Bailey came onto the stage sharing songs and lightly comedic stories and even some fast dancing! We in the audience heartily approved of the antics of the woman known as Pearlie Mae and gave her the next standing ovation of the evening!


After a brief intermission, Bob Braun returned to finally introduce, "the funniest man in the world," Bob Hope! Here was what the crowded Coliseum had been waiting for and he immediately got his standing ovation just for being there! Launching directly into first a song and then his customary monologue, Bob left no doubt as to who the real star was on this star-studded program!


He brought out Miss America (Dorothy Benham) and then Reds catcher Johnny Bench to do one song each. Then he brought on Wayne Newton.


Wayne Newton is unquestionably an entertainer. He knew just what the audience wanted and gave it to them in spades! As he sang and joked, the stage was constantly bombarded by girls of all ages trying just to touch his hand. It was reminiscent of an Elvis concert. Keeping the stage for much longer than his supposedly allotted twenty minutes, Newton sang his hits and favorite songs and played at least three musical instruments! While catching his breath between high-energy numbers, he also joked and told stories until nearly 11:30 PM!


When Bob Hope took the stage again, it was for a song and dance with his wife who had been in the audience. Then, right at midnight, they burned the mortgage onstage!


The event was touted in newspapers the next day as the single biggest show to ever perform in Cincinnati and said to be a part of history in the making! It may not be the biggest show for long, though, as Hope has promised to return again next year...with Perry Como and Bing Crosby!