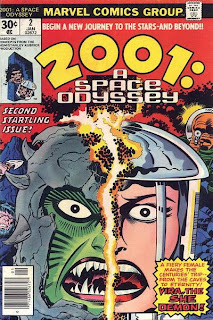 Found out Terry had gone to see Hope last weekend, too.

Roddy was on with Carol tonight and I was able to catch Monty Python on 54.

NOTES: IRON MAN I had just come back to not long earlier after buying scores of issues I had never had. Eventually I realized that it was no longer as good as it had been and dropped it.


2001 was Jack Kirby's ongoing series adaptation of the classic Stanley Kubrick film and sadly one of my least favorites of his long career. Every issue was essentially a rewrite of the issue before it. So I dropped it. Then he introduced a character in the title known as Mr. Machine...later Machine Man...who would go on to some success in the Marvel Universe. I was already gone by that point.


Roddy was, of course, Roddy McDowall, a favorite guest of Carol Burnett on her Saturday night variety series.


"54" was and is Channel 54, a low-power Covington PBS  and KET (Kentucky Educational Television) station.
Posted by Booksteve at 12:10 AM