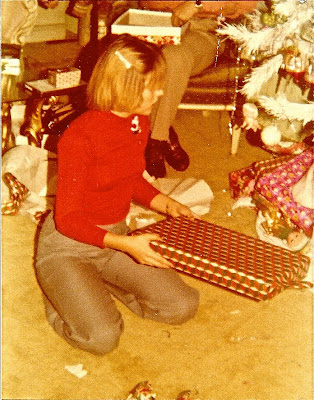 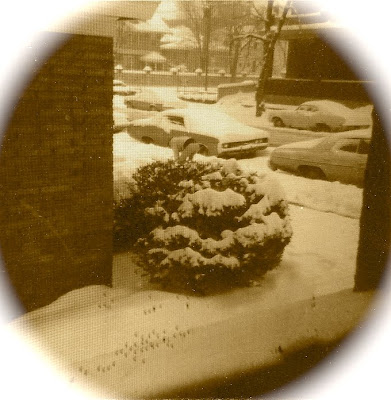 At left is my then 11 year old cousin Rachel as referenced in the post of Jan. 4th. By my recollection, this was one of only two times she visited our apartment while I was growing up, this time for a belated exchange of Christmas presents.
The previous time that I recall was on my mother's birthday in August of 1971 where I snapped a picture of her and my cousin Andi playing with my
MAJOR MATT MASON toys!
On that night in 1971, my mother was given a beautifully intricate crystal vase and all of us kids were warned to be careful or we would break it! For the record, we didn't. It currently resides on the mantle behind me as I type this nearly forty years later. 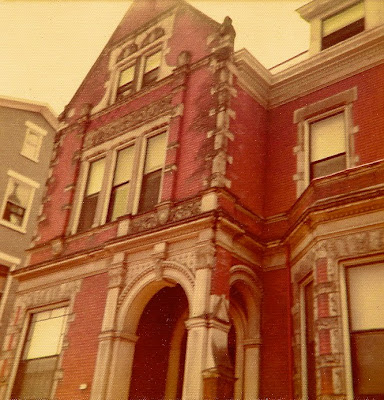 The second photo shows the view out one of our side windows in the living room during that winter of 1976. It may have seemed to us like a big winter but it was over the following two seasons that we would have temps at 25 below zero and snow that went nearly up to my waist in the alley behind our house!
The wall you see there is the edge of the Social Security office building next door where, in 1975, I began helping my parents as the new janitors of the building (also owned by our landlord) in what would eventually become my first job when their health precluded continuing a few years later.
Speaking of our house, this was it in the bottom photo. Our apartment was the one barely seen at lower right here on the first floor. Two bedrooms, one living room, one kitchen and one bath...all HUGE and with ridiculously high ceilings. There were sliding oak doors between the living room and the main bedroom and another sliding door into my bedroom (which tended to fall off its rollers). Not much closet space, though. My dad talked the owner into letting us move in in 1966 even though he had a "no kids" policy. I outlasted both parents and two owners and was living with my future wife when I finally moved out in 1991 after 25 years. Our original rent had been 80 dollars a month. When it hit 800 dollars a month we reluctantly moved. It looks pretty much the same today after nearly 150 years. I have many photos of me taken on that porch growing up and in recent years have also taken photos of Rene, David and Brittany Rose on that same porch.
Posted by Booksteve at 10:19 PM