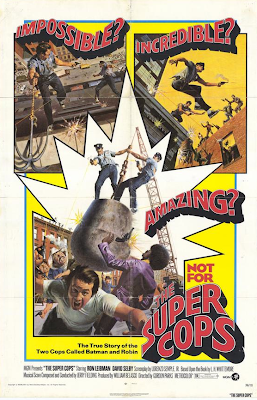 11 PM
This is it! Seventeen years ago today, also a Friday, at 4:29 PM, I was born! I'm told it was snowing that day, also!
Lucky day, too! We really were off school yesterday so I wasn't playing hooky! Below zero temps this morning but I felt snug in my new THICK coat and new boots. Very slippery outside. Did pretty well in school today, too. Barely saw Angie, though.
Tonight we watched HAPPY ANNIVERSARY, CHARLIE BROWN. Then we watched THE SUPER COPS, the movie based on the book about Greenberg and Hantz that I enjoyed so much a few years ago! The picture stars DARK SHADOWS' Quentin--David Selby. It isn't very good, though.
Dad got me coneys and I played myself the Beatles tune, BIRTHDAY. I was watching the clock for my exact birth moment but I still ended up playing it a minute early. I have long said that seventeen will be the best year after eleven. Eleven lived up to its promise so now, seventeen...it's your turn. From the very moment I started thinking about it all today I felt really good. Realistically I know that there will be bad stuff, too, but I'm convinced the good will outnumber it...starting with next weekend's comic book convention!
NOTES: I had spent several years building up seventeen as such a pivotal year in my mind that it couldn't possibly live up to my expectations. There were quite a few good things to come, however. And yes, I celebrated my birthday alone then and since. The only actual birthday party I ever had was when I turned eleven. I said in 1976 that eleven had been a great year. Let's just say the greatness all came AFTER that party.
The term "coneys," for those of you not enlightened regarding such culinary delights, refers regionally to a hot dog, served on a bun with Cincinnati's signature Greek chili--a thin, watery sauce that includes cinnamon, chocolate and cumin--and topped off with a ton of thickly chopped onions and a huge pile of cheddar cheese. The coney is and long has been my favorite food. I tend to eat them six at a time...although in recent years, I'm just as likely to get six and save three or four 'til later. Never having been a fan of cheese (except on pizzas), I skip the Cheddar, though.
As far as SUPER COPS, it had been a best-selling book based on the exploits of two maverick New York Police officers fighting corruption a la SERPICO. They became known as "Batman and Robin." The inevitable film version came in 1974 but disappeared quickly until it turned up on network TV here. As stated then, it really wasn't very good. David Selby, a very mannered actor, starred with then stage actor Ron Liebman (married to actress Linda Lavin at that time), a very loud, scene chewing actor.
Posted by Booksteve at 1:19 AM