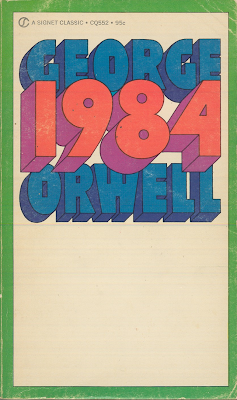 11:00 PM
We all had to return to homeroom this afternoon in order to get some kind of form we had to take home. I'm not sure what kind of form it was because I then went and forgot it anyway. I only missed two of the five questions on yesterday's Physics exam.
Today I finished 1984 in which Winston, the main character with whom I (and the readers) identified was forced to stop his rebelliousness and conform...and then was killed. Jeez! Talk about a bitter ending! I just hope we never end up in that type of world in real life in the future.
I stood pretty close to a girl on the way home who I had never seen before. I couldn't stop looking at her, though. I constantly watched that real pretty girl! Light hair, braces, tinted glasses, expensive looking coat. Maybe a grade younger than me.
After I got home, I spent most of the late afternoon really enjoying Shang-Chi! I got Bob Gerstenhaber's new ad in the mail today but I'll wait to order anything in case maybe I can get it at the Con this weekend.
I was late to work tonight because I got caught up in watching a STAR TREK rerun.
NOTES: Not going to get too political here but one could easily argue that aspects of 1984 have come true in recent years in the US and elsewhere.
Shang-Chi was the hero of a Marvel comic book entitled MASTER OF KUNG-FU. In 1981, I was asked on a radio show what I thought was the best comic book in recent years and I went on record as saying I thought MASTER OF KUNG-FU--which had long since risen above it's tie-in roots to the martial arts movie phenomenon of the early seventies--had been THE best written and drawn comic of the entire decade. I stand by that.
Robert Gerstenhaber was a fanzine publisher and, apparently, a comic dealer of some sort. I hate to say it but I don't recall his name at all. I just Googled him.
Posted by Booksteve at 12:04 AM