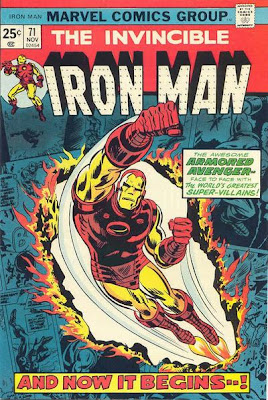 10:00 PM
The day went real fast. I got a lot of new and old comics on my Yellow Kid trip including one whole long run IRON MAN series and I really finally finished my DOCTOR STRANGE collection! Spent most of the rest of the day propped in in bed reading IRON MAN listening to REVOLVER which I also picked up while I was out!
I had an argument with dad about staying up late tonight or Wednesday.
NOTES: I very much remember picking up that long IRON MAN run. Although the character has never been a great favorite of mine, over the next few days I greatly enjoyed about three-four years' worth of adventures I'd previously skipped and then stuck with the title into the early eighties.
REVOLVER, was, of course, the Beatles album. Eventually it would be the one I name as my favorite Beatles album, in fact. This was the first day I heard the whole thing.
My first Beatles album was THE BEATLES AGAIN, the posthumously released album highlighting HEY JUDE and a bunch of earlier non-album or otherwise obscure tracks. My first Beatles single was THE LONG AND WINDING ROAD, their final release before the break-up. After that, I spent the rest of the seventies slowly but surely picking up Beatles albums--even bootlegs when I could find them--to the point where I'd be shocked today if there was a tape of Ringo coughing in 1964 that I haven't at least heard.
Posted by Booksteve at 12:06 AM