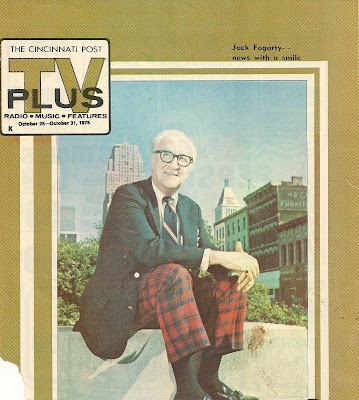 6:00 PM
Not an especially good day but a breezy one at least. Still sick. Fast and quiet.
We had an assembly at school this morning. I found out that girl on the bus's name...I think. "Melody Rush."
Over the river after school I ran into Jack Fogarty! I started my Iron Man collection with the new issue out today and I also got another new Beatles book!
NOTES: Another sparse day but there are some much longer entries coming up in a few days.
Melody Rush wasn't really the name I found out. As I said previously, I don't even recall this girl. I looked her up in the yearbook just now though. Cute but rings no bells. Doesn't even look "my type."
Jack Fogarty was an old-time radio newsman who had been on TV my entire life. By this point in the seventies, he was given a spotliight report that always opened with his signature line, "I may be wrong but it seems to me..." He was one of the first local celebs I had ever seen downtown.
I was a latecomer to Beatles fandom but I just kept buying books about them. I currently have a whole bookcase of Beatles books.
Posted by Booksteve at 1:55 AM