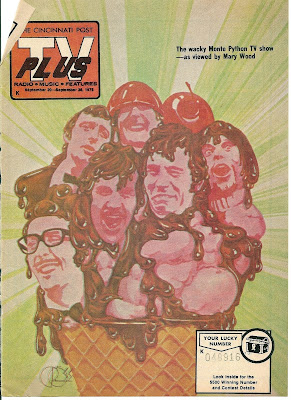 5:00 PM
Still feeling pretty good although a bit more nervous at school today for some reason. Didn't do so well on a Spanish test. I may have actually been counted absent in Physics by today's substitute teacher. Ugh! Felt good to get home again.
11:00 PM
I'm falling behind in my Sherlock Holmes reading! I plan on finishing that ridiculously thick COMPLETE SHERLOCK HOLMES one story at a time! Watched MONTY PYTHON'S FLYING CIRCUS for the first time this year tonight. Those guys are SO funny but I keep reading that Americans don't GET their humor. Also saw PLANET OF THE APES star James Naughton on TV for the first time since we saw him up in Dayton last summer in BUS STOP. Singing yet! Who knew he could sing?
Got the new TBG in the mail today. As always, lots of interesting reading, particularly about Jerry Siegel and Joe Shuster and the TOMORROW comics episode.
Oh! Almost forgot to mention we started the novel 1984 in Sci-Fi Class yesterday. So far it isn't bad!
NOTES: I never did finish the Sherlock Holmes book but I did read quite a few of the stories along the way. I still have that exact volume.
I have remained a big Python fan and expanded out into all kinds of British humor from THE GOON SHOW and THE TWO RONNIES to the CARRY ON films, George Formby, Norman Wisdom, Alec Guinness, Peter Sellers, etc.
My parents and I had previously taken a bus to Dayton, Ohio to catch actresses Karen Valentine and Rose Marie in summer stock doing BUS STOP. Naughton, one of the astronauts in the 1974 PLANET OF THE APES TV series, had appeared in the cowboy role. Years later, he would be known as a successful, award-winning Broadway musical star. According to Wikipedia, he is currently the voice of Audi in the US.
TBG was THE BUYERS GUIDE FOR COMICS FANDOM, Alan Light's tabloid newspaper that united fandom and morphed over the years into Maggie Thompson's COMICS BUYERS GUIDE magazine of today. I had been a subscriber since issue 17.
And yes, we really did have a Science Fiction Class in my Junior year! 1984 went from "isn't bad" to becoming and remaining one of my favorite books.
Oh, and the TV mag cover there is from the time of Python's local TV debut on PBS the previous Fall. Note that it's "Monte" Python. The tasty art is by Daerick Gross, then a cartoonist for the CINCINNATI POST, now a long-time internet friend and creator of, among other great comics, MURCIELAGA!
Posted by Booksteve at 1:53 AM