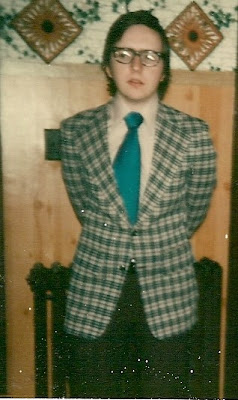 11:00 AM
Awoke today to discover school called off again due to the deep snow that began falling last evening. At least I hope school was off 'cause I am. Mom stayed home today, too. The snow really isn't that bad. I went out and shoveled some off the walk earlier.
7:00PM
I finished most of the initial reading of my con-ware and went ahead and filed it all. I picked up a little ILLUMINATUS and readied some Sherlock.
I've been seriously thinking about philosophy and the thoughts brought on by my talk with Terry. I've learned many things. For instance I realize now I was never really suicidal but over the past few years all the thinking about it and wondering what it would be like for everyone else if I were gone kind of convinced me that I really was suicidal. But I never was! Might have been if I continued thinking along those lines, though. Scary to imagine!
I've decided I'm going to work it out with Angie slowly until things either happen just exactly like I'd like them to happen or until I just lose interest. I do not want to be turned down again!
10:00 PM
Mom told me tonight about a bad fall I took when I was just barely learning to walk. She says that that might have caused my eye problems. I tend to agree with here.
UPDATE: First of all, about this suicide thing, I was never--as I state here--actually suicidal. I did, however, like a surprisingly large number of teens, go through a period where I became obsessed with it as a possible escape from bullying and loneliness. I would imagine how guilty people would feel when I was gone and how they'd wish they'd treated me better.
BUT...in reality, I had it pretty good. I hadn't really been bullied much since Junior High. In High School, I was mostly just ignored. I had great parents and wonderful escapes into movies and comics. So eventually that dark spell passed.
Some kids don't have it so lucky. The bullying hurts on more than just a physical level. The loneliness can sometimes hurt even worse. If kids have no interests they can throw themselves into like I did until the storm blows over, they get trapped in it and THAT'S when they act out against themselves or others. "No child left behind" was such a good sentiment. We as a society should do everything we can to make it a reality on every level possible.
'Scuse me whilst I step off my soapbox.
I had gotten my first glasses when I was five years old. I purposely "lost" them the very next day (ironically in a big hole next to the apartment where my future wife would live many years later). My original eye problem was one lazy eye, a common enough issue. I don't think a fall while learning to walk would have caused that.
Posted by Booksteve at 1:53 AM