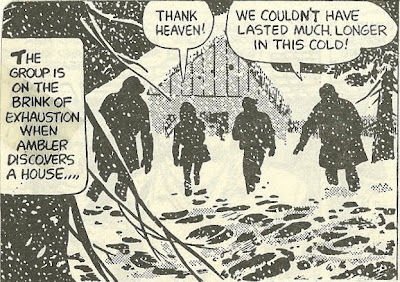 10:00 PM
As the weather got worse last night, there was some doubt as to whether we would have school today. We listened to the radio starting at 6 AM and finally heard them say Covington Public Schools were closed. The problem is, they're supposed to say Covington Independent Schools when talking about mine. Sheesh! I was a nervous wreck trying to decide whether or not to go in! Mom decided she was going to stay home from work so I did also. All day I kept listening for some proof one way or another but found none. I hope we really were off for a change!
While I was home, I watched that new show MARY HARTMAN, MARY HARTMAN for the first time. Wasn't bad I guess but way too serious to be called a comedy. It was just...absurd for the sake of being absurd.
I took two pictures of the snow from the third floor window. My last pen pal letter was returned for insufficient postage! Ugh! I put Doug Wildey's AMBLER strip in as a back-story in my PEANUTS book I made.
Things are just like they've been for the past couple of years but tomorrow at least five things will be different. In Louisville, I could even see an X-rated movie at 17! I've managed to avoid thoughts of that sort so far this year but I can't avoid them forever cold turkey! After I give in though, I'll try harder to avoid them just a day longer next time! I did get ONE today for the first time this year but I easily willed it to go away. I am in charge!
11:00 PM
The snow persists tonight making tomorrow morning a likely predicament also! At 10 o'clock, temperatures hit zero degrees. Brrr! Probably be even lower before midnight. Falling behind in my Sherlock reading. I'll probably still be reading this thing come July. Just watched Bill Bixby as a Punisher-type vigilante on STREETS OF SAN FRANCISCO.
NOTES: When I was a kid, Covington schools never closed. Period. It didn't matter that I lived two blocks away, though, there were times I still couldn't get there if the city was covered in ice! By this point, however, they closed sometimes...which made it even harder to know what to expect. Nowadays, they robo-call to tell you when they're closing...at 5 AM.
I would never be a fan of MARY HARTMAN, MARY HARTMAN although I dearly loved the later FERNWOOD and AMERICA 2NIGHT spinoffs (which sometimes featured Kip King whom I would later get to know). The AMBLER story I mention was coincidentally about a giant snowstorm and was printed a while back on my blog.
Like many teenage boys, I was in a constant struggle to main control over my hormones. Sometimes, as here apparently, I would be positively chaste in my thoughts and actions but other times I would totally give in. The fact that I had grey hair by age 13 meant that I was never once carded when I bought dirty magazines! Be aware that this subject DOES come up again throughout the year.
As far as the 5 things that would be different the next day, I have no idea what the hell I was talking about. Wish I could remember that STREETS episode, too, but drawing a total blank.
Posted by Booksteve at 1:49 AM