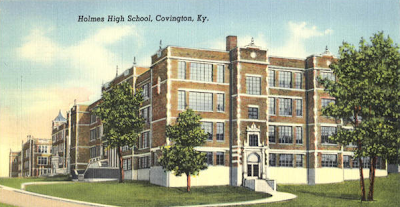 2011--I write a lot here about my High School in 1976. Here it is. Well...a portion of it. Along with the three buildings seen here there was another large building across the road seen in this old postcard picture. In fact, today, there are several more buildings on the other side of that road (including a nursery). There were and are are two full sized sports fields attached also. Holmes High School was even then more like a good sized community college campus than a high school. At the time I went there--between Fall of 1974 and summer of 1977--it was said to be a big drug school. Only once, though, did I ever see any evidence of that and that was when one student bought a tiny bag of pot from another across my desk in math class! I think the one selling it went on to be a rather prominent...well...better not say.
My son currently attends this school.
Posted by Booksteve at 2:19 PM