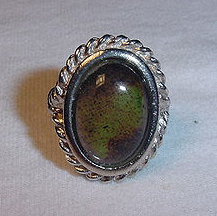 6:00 PM
Not a good day. I wore my mood ring and it was blue almost all day. Fair until 5th period when I drew a blank on an Algebra quiz. At best I got 2 right but I doubt even that! We had 20 minutes for a Physics test but I took 30 and I doubt I got any of that right either! Took my new calculator but forgot to use it. Then I fell as I was leaving. Scraped up my hand but just ruined my clothes! Missed my regular bus. I did manage to catch an Eastern home instead of having to walk back 25 blocks! Then, as I said yesterday, the bad things led to a very good feeling when I finally got off the bus.
11:00PM
Mrs. K upstairs gave us Burger Chef gift certificates. Neat!
Tonight I saw Duke's American special and a rerun of ELVIS ON TOUR. I saw a commercial for UNDERCOVERS HERO. Starts tomorrow. That may be what I end up seeing on Saturday.
Mom told me she saw in the paper where Debbie's mother is being sued over an accident. That reminds me. I think I had a dream about Angie last night. Seems like it was a good one. Not a sex one, just love.
NOTES: Mood rings were all the rage in the seventies. Essentially they were cheap rings with a big glass that had a layer of liquid crystal element that was affected by the wearer's body heat and supposedly reflected moods and changing emotions. I still have mine but I haven't worn it in years.
We lived between 3rd Street and 4th Street. The school was at 26th Street. If I missed my regular bus home, it was either wait a half hour or walk a half hour. On this occasion, I started walking but took a route where I lucked into catching a different bus, the Eastern.
Mr's K was a 90 year old woman who lived upstairs. She was the landlord's mother-in-law. She was very nice, very short and very feisty. Probably would have lived forever if she hadn't been hit by a truck crossing the street some time later.
Duke was, of course, John Wayne. The special referred to was called SWING OUT, SWEET LAND and was actually a rerun from 1971. It was Wayne's only starring TV special and featured a huge all-star cast, many of whom only appeared long enough to be recognized. With its patriotic theme, it was reshown in '76 to tie in with the Bicentennial.
I'll tell you now, not only does this thing with Angie not go anywhere but I really don't recall having this much of a crush on her!
During this week the number one song in America was Barry Manilow's I WRITE THE SONGS. I kind of liked Barry's songs but wasn't a huge fan. I would become a bigger one over time. The best concert I ever saw was an early nineties Manilow concert my wife and I went to in Cincinnati. The man is a major showman.
Posted by Booksteve at 1:35 AM