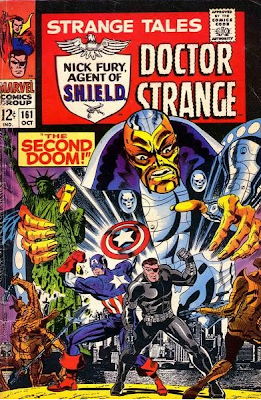 10:00 PM
Re-read the entire Yellow Claw series in S.H.I.E.L.D this morning. Great stuff!
After much debate, I saw the FRITZ double feature with no problem this afternoon at the International '70 but hunger forced me to leave early so I didn't get to see HEAVY TRAFFIC. Oh, well. It didn't look as good anyway.
While I was out I picked up the new TMT. Saw a hydrant opened on the hill!
Tonight watched the return of ALMOST ANYTHING GOES. A fun show.
NOTES: The Yellow Claw was a fifties Fu Manchu rip-off villain who had been revived to great acclaim in Jim Steranko's NICK FURY, AGENT OF S.H.I.E.L.D. series in Marvel's STRANGE TALES in 1966. Steranko's innovative art and storytelling were still the talk of the industry by this time a decade later. In 1977, I would meet him at a comic book convention in Columbus.
WE already mentioned Bakshi's FRITZ THE CAT. Here, it was shown with its non-Bakshi sequel, THE NINE LIVES OF FRITZ THE CAT and then Bakshi's HEAVY TRAFFIC. I hadn't eaten anything all day and the triple feature was too much for me so I slipped out after the first two and went to Wendy's around the corner from Cincinnati's INTERNATIONAL '70 theater. That was one of my favorite theaters. The following year it would close and reopen later as THE PALACE (its original name) where I would see live acts including Bob Newhart, Liza Minnelli, THE PASSSION OF DRACULA and THE ROCKY HORROR SHOW before it closed again and was torn down.
Apparently I was convinced I hadn't missed much by skipping out on HEAVY TRAFFIC. In the early eighties I finally saw HEAVY TRAFFIC on home video (Beta) and it immediately became not only my favorite Bakshi film but one of my favorite films of the early seventies! Last I looked it's on YouTube if you haven't seen it.
TMT was a monster-centric tabloid newspaper called THE MONSTER TIMES that covered horror comics and movies. ALMOST ANYTHING GOES was an early reality show/game show with people participating in various athletic games akin to those one might find at a summer picnic. One of the host/commentators was Regis Philbin who just this week in 2011 announced his impending retirement.
Not only do I have no clue as to why I found an open hydrant so exciting in 1976, I'm not even sure what hill it would have been on as there were no hills around where I lived at that time.
Posted by Booksteve at 12:52 AM