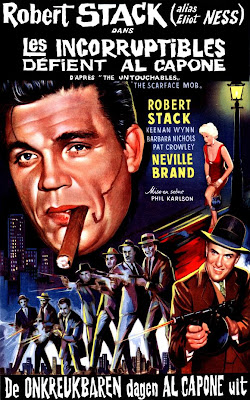 Terry seems really miffed because I skipped the new KING KONG. Not sure why.

Two trips into Cincy. Got some dinner and the new PLAYBOY (no IT). Then had to go back for medicine for Dad's toothache.

There was an UNTOUCHABLES movie on today.

NOTES: THE UNTOUCHABLES was a show I had vague memories of as a child in spite of the fact that it was NOT a show little kids should have been watching. Produced by Desi Arnaz, it was the dramatized story of G-Man Elliot Ness and his fight against the gangsters and bootleggers of the 1920's.  The movie I saw that day was THE SCARFACE MOB, pieced together from the 2-part pilot film of THE UNTOUCHABLES and co-starring the great hammy character actor Neville Brand as Al Capone, a character who was in jail throughout the rest of the series.


Above right is a theatrical poster for THE SCARFACE MOB but I went for the Belgian version seen here because of the gleeful look on Stack's face as he guns down the bad guys. Looks ten times creepier than Capone's!