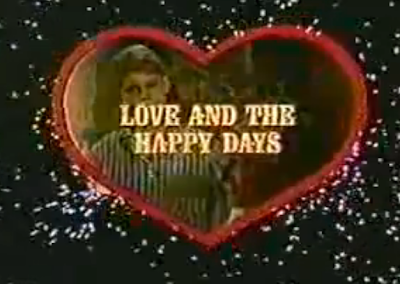 Two subs today.
I added several pages to my other Journal.
Looks like it's more or less official about late next week. Dad's going to be off, too.
I talked with Constance today on the way to the bus and mentioned I knew her birthday was coming up. She seemed not only surprised but a little worried that I knew that so I guess I'll be skipping the card I had planned on sending.
Watched the original pilot for HAPPY DAYS on a LOVE, AMERICAN STYLE rerun. Was weird. Had Harold Gould and Susan Neher in place of Tom Bosley and Erin Moran. And no Fonz at all!
NOTES: The reason I knew Constance's birthday goes back to when I sat near her in the school auditorium a couple of weeks earlier. MY spooky memory immediately made note of her birthday when she mentioned it to her friend that day. To her, though, it must have come across like stalking. To me, it was just information gathering.
HAPPY DAYS was, at times, a great show. By the end, it was too stagey and too preachy and, of course, would literally define the term, "jump the shark." But in 1976, the fifties were still cool, Fonzie was still cool and HAPPY DAYS was still cool! The original pilot hadn't sold but, like many failed sitcom pilots, aired as an episode of the anthology series, LOVE, AMERICAN STYLE. If I remember correctly I HAD seen it when it first aired but here, several years later, the differences were a revelation making it seem like an Earh 2 episode. DC Comics fans will get that reference.
Posted by Booksteve at 12:12 AM